The French Quarter, located in the original walled city of Charles Towne, is a beautiful historic area. Bounded by the Cooper River on the east, Broad Street to the south, Meeting Street on the west, and Market Street to the North. The name “French Quarter”, which recognizes the high concentration of French merchants in the area's history, came into popular use in 1973 when preservation efforts began for original warehouse buildings on the Lodge Alley block. The area subsequently took on the name of The French Quarter and was named to the National Register of Historic Places in 1973.

The neighborhood was first settled as part of the original Grande Model of Charles Towne in 1680. The French Quarter is famous for its numerous art galleries, world-renowned restaurants along East Bay Street, and is home to Charleston's Waterfront Park, a favorite place for locals and visitors alike to sit and swing in one of the oversized swinging benches and watch the dolphins play in the harbor. Waterfront Park is home of the beloved Pineapple Fountain, seen in many popular Charleston photos, where on some of Charleston’s hottest days you might find children taking a dip in the fountain.

Charleston's French Quarter is home to many fine historic buildings. A walk through the French Quarter takes visitors past some of Charleston’s acclaimed historic landmarks including The Old Slave Mart, built by Z.B. Oakes in 1859 and the Dock Street Theatre, arguably the first site of theatrical productions in the United States. The French Huguenot Church, a beautiful Gothic Revival church which houses the sole-surviving French Calvinist Congregation in the United States. St. Philip's Episcopal Church is well known for its lovely graveyard, the final resting place of Edward Rutledge, the youngest signer of the Declaration of Independence, and U.S. Senator and Vice President John C. Calhoun, whose body was exhumed during the Civil War and buried near the church in an unmarked grave.

As you stroll through the Historic District, you are oftentimes walking on streets that have a foundation simply of sand, bone and seashell. The Pink House, widely regarded as the oldest building in Charleston, sits on Chalmers Street, a beautiful cobblestone street. Most of the cobblestone that was used in streets in the colonial period, such as you see today on Chalmers Street, actually came from foreign shores. Local Charleston historians say that the cobblestone used in Chalmers Street was actually the discarded ballast used on foreign ships that came to the walled city for trade.

The French Quarter is a quintessential historic Charleston neighborhood that offers a glimpse into the foundation of Charleston’s history. With elegant homes and carriage houses tucked along the narrow streets, beautiful gated-courtyards and street level window boxes rich with geraniums, bougainvillea, Carolina jasmine and salvia, the French Quarter is the jewel of this enchanting southern city.

Let us help you discover how you can make the French Quarter your home. 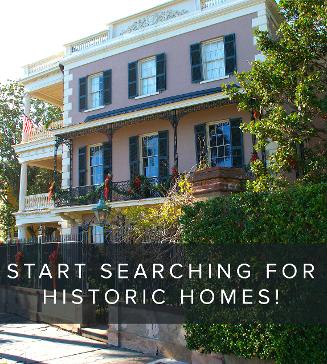 Discover Charleston
Follow Your CURIOSITY when You're in Charleston's French Quarter
Real Estate
Living in Charleston SC: The Allure of a Historic Carriage House