Looking outside today presents a typical northern winter scene.  Blanketed in almost 5 inches of snow and icicles dripping slowly in the late morning sun.  An idyllic scene perhaps, except our location is most definitely in the South and as such, our buildings are not designed for this type of climate condition. As unlikely as this scenario may seem in Charleston, SC, with all the climatic uncertainties we experience these days, a little forethought in the build process can reap ongoing dividends in both comfort and cost to be enjoyed for years to come. Being knowledgeable about and applying advanced building  techniques and materials can deliver big on efficiency.

Last year we undertook an experiment in "green building" methodology.  A small home on Line Street built to a very high insulation standard using Structural Insulated Panels or SIPS for short.  Our research led us to form a relationship with EcoPanels in North Carolina who manufacture 4 and 6 inch fire-rated polyurethane SIPS sandwiched within OSB outer panels.  The year prior (2016) we built a similar sized home at 233 Ashley Avenue using a traditional stick-build methodology.  Both homes were built to modern building code using good quality materials.  Both used similar air conditioning and window systems.

So how do they compare?

The SIPS home was watertight three days after start of construction on top of  pre-prepared footings.  The home itself was completed in 2.5 months.  The same build stage for the stick home took 4 months so the build methodology of SIPS offers a speedier build for a simple home design.

The SIPS home has always outperformed the traditional stick-build home with utility bills on average of $50 per month versus about $120 per month of the traditionally built home, adjusted for size.  It's also quieter and completely draft free.

There was a cost difference in favor of stick-build construction,  BUT some of this added cost was a result of our own inexperience with SIPS construction, so being well experienced now, some of that can be reduced. However, it is likely SIPS construction will always cost a little more to construct, though it's in the region of about 5%, less than that if the reduced cost of finance & carrying is considered with a quicker build.  We wrote a blog about costs HERE.

Thankfully we have yet to have had a test of wind performance, though I do know that 4 homes built with the same product in the US Virgin Islands survived Hurricanes Maria and Jose in the late summer where every stick built home in the area was demolished down to the foundations. The SIPS build really is incredibly strong and capable of withstanding 150+mph wind speeds which is quite a feat.

So lastly, how are both homes performing is this unusual cold snap?  The SIPS house has had no issues, air/air heating systems remain functional, no pipes have frozen and it's indeed as if nothing has happened.  The stick build house has not fared as well, despite double glazing and being built to modern code.  Pipes to the Rinnai water heater are frozen both outside and under the house.  They were not insulated which is partly to blame, though without the faucet being set to drip they probably would have frozen anyhow. The air conditioning compressor is a block of ice and turned off.  I doubt it will be functional again until the weather heats up.  The tenants are understandably less than happy, but to be honest that’s the position of many homeowners in town right now and there is little anyone can do about  it.

Our construction business, Simplified Construction, undertake many renovations and custom home builds using stick build methods.  It’s a good, proven way to build a house.  However, our experience of SIPS has been sufficiently positive, so much so that we will build our new home further south in Palmetto Bluff in Bluffton SC, using this method.  We are now also the coastal South Carolina representative for Eco-Panels and have completed the necessary training to fully understand how to maximize the advantages of this building method.

Note: For anyone considering a new build project or large addition I’d recommend giving this methodology serious consideration. We did - and we have gained substantially as a result. See how Eco-Panels make a huge difference when building a home from the ground up in Charleston SC ... 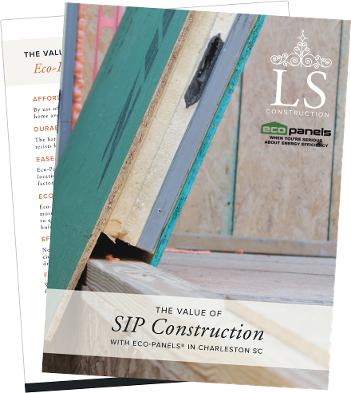