My Top 5 Favorite Neighborhoods In The Charleston Area

Charleston SC is known as a top tourist destination with world-class restaurants, compelling history, and fabulous beaches, but to locals, it's simply a vibrant place to live, work, and raise a family. Whether you are a born and raised Charlestonian, or simply ended up in Charleston by some other lucky means, this city offers plenty of neighborhoods that still have a small town feel. These are streets where neighbors get together for a cookout, kids stand together at the bus stop, and your car is always sandy from an afternoon at the beach. Here's a look at some of my favorite neighborhoods that have a quintessential lowcountry appeal.

If you're looking for some “easy living,” Grimball Gates is the ideal neighborhood.  Located just 12 miles south of the Charleston peninsula on the Intracoastal waterway, this deep water, gated community features 90+ acres of nature preserve with miles of walking trails, private pavilion for entertaining, and a community dock for fishing, crabbing, kayaking, boating and private boat storage. The neighborhood boasts stately lowcountry homes with pond, marsh and river views, and includes community amenities such as:

What are the neighbors like?  Friendly, dog-loving, golf cart-driving, relaxed bunch from retirees to families, large and small.

While James Island has several neighborhoods to choose from, Stiles Point is my favorite. The Stiles Point neighborhood features 200+ homes on over 200 acres, many with marsh and harbor views.  The neighborhood was named after Benjamin Stiles, founder of the cotton plantation that was built there around 1741. The original plantation house, the Stiles-Hinson House, is located at the end of Old Plantation Drive.

The blend of antebellum architectural style with state-of-the-art upgrades, wrap-around porches and in-ground pools with close proximity to some of the best schools in Charleston makes Stiles Point Plantation one of Charleston’s most desirable neighborhoods. These three, four and five bedroom single-family properties range from $480,000 to $1.5 million.

Just over the Ravenel Bridge from Charleston, Mount Pleasant is convenient to both downtown and the popular beaches of Sullivan's Island and Isle of Palms plus offers a range of older established neighborhoods and new subdivisions. Its award winning public schools and the town's robust recreation program make it a desirable place to raise a family.

One of Mount Pleasant’s hidden treasures, Creekside Park neighborhood offers the feel of country club living in a pristine waterfront location only minutes from downtown Charleston. First developed in the late 1960’s when the U.S. Highway 17 Bypass was opened along Shem Creek, this quiet expanse of large lots, custom four and five-bedroom homes, and mature trees features a tennis club, extensive shaded park-like setting and a community dock. A number of Creekside homes have private docks along scenic Shem Creek, and the entire neighborhood has an aura of comfort and privacy while centrally located near Mount Pleasant dining, shopping and recreational facilities.

Neighborhood amenities include pool, lighted tennis courts and boat dock and ramp on Shem Creek (deepwater). Membership is available to Creekside Tennis and Swim for a nominal fee.

What are the neighbors like? Families, professionals, retirees. Upper middle class to upper-upper class, with homes ranging from $500K to $2 million.

With a population of 48,848 people and 20 constituent neighborhoods, Summerville is the seventh largest community in South Carolina. Known best for the impressive success of their high school football teams, Summerville is also considered one of the most desired places to live in South Carolina due to their reputation for having among the top school districts. Additionally Summerville's  convenient location along I-26 offers a quick commute with close proximity to Boeing, Volvo, Google, and many of the area hospitals.

Fun fact: In 1938 Elizabeth Arden bought a summer home in Summerville, South Carolina. It had 15 rooms with 12 foot ceilings and a RED front door. She sold the house in 1954 but even still today, it is known as the "Red Door Estate."

The Charleston peninsula - between the Ashley and Cooper Rivers - offers one of the most charming and eclectic lifestyles of all!  Church steeples, cobblestone streets, and hidden alleyways, blend a European feel with the history of an old American city. Easily walkable and bikeable in size, the peninsula is home to a diverse population, from "blue-blood" Charlestonians to tattooed college students and everyone in between.

What are the neighbors like? You'll find a mix of generational locals, professional, affluent and well-traveled residents.

On the peninsula's northwest corner along the Ashley River, you will find Wagener Terrace - a hip, racially and economically diverse neighborhood. Most of these homes were built between 1920-1950 and offer a mix of Craftsman-style cottages, classic brick Georgians and fixer-uppers. Its highlight, Hampton Park, is a favorite for Sunday picnics, as well as a popular downtown destination for walkers, runners, cyclists.

What are the neighbors like? From young families and professors at The Citadel and College of Charleston, to yoga teachers and tech professionals.

Note: In Charleston SC, there's no shortage of great neighborhoods to choose from, whether you're looking on the peninsula, on the sea islands or in Summerville. Finding your perfect home starts with finding the right neighborhood. To discover homes in these great neighborhoods and more, start your search here... 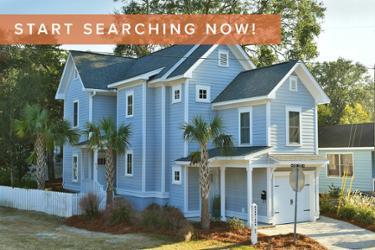